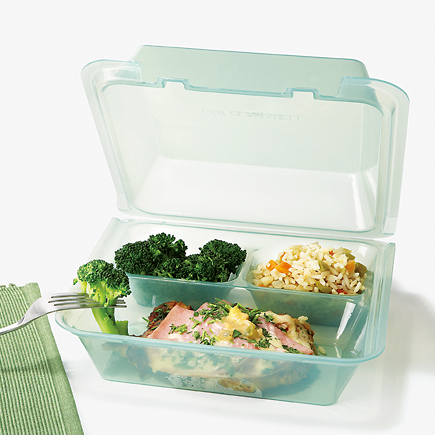 Styrofoam and paper boxes have always been a staple of my college dining hall. When exam rained down or the dining hall was a bit too crowded, to-go boxes have provided the best option. But unfortunately, they produce a large amount of non-biodegradable waste that ends up in the garbage can all across campus.
Luckily the Student Environmental Alliance (SEA) has started a new campaign to say goodbye to the Styrofoam and hello to reusable take-out containers.
Much like reusing other plastic food containers, made-for-reuse containers like the “Eco Clamshell” by G.E.T Enterprises help keep waste at a minimum. The Clamshell is a dishwasher safe, break-resistant food container ideal for college campuses such as my own, as well as corporate cafeterias or meetings. Surprisingly sturdy, the boxes are also stackable just like regular take-out trays, utilizing three separate sections and an attached lid.
The plastic is polypropylene, a recyclable plastic resin also used in packaging and various automobile components. While
plastics themselves can be eco-hazards, in this case it appears to be the lesser of two evils.
There are a few inconveniences to the re-usable containers, such as the initial four dollar deposit in order to use a box. The system is set up so that an initial four-dollar purchase will allow you to use a container and bring it back at the next meal, clean or dirty. If it is clean it can be reused immediately. If it is dirty it can be exchanged for a clean container at no charge. At the end of the year, the container can also be returned for a complete four-dollar refund.

In addition to this, the dining hall no longer offers the option of any kind of cardboard to Styrofoam container, instead of forcing students who may otherwise decline the option due to minor inconveniences to either purchase a re-usable container or bring their own.

Other complaints center around the inconvenience of carrying the container constantly in case you might have to eat on the run. But it is a small inconvenience in comparison to the large portion of campus daily waste being reduced to zero.
For four dollars I have already gladly invested in my teal container, not only for the purpose of carrying food, but it’s a great way to store leftovers without the eventual disintegration of the cardboard container. On the whole, it’s well worth the money and the effort.