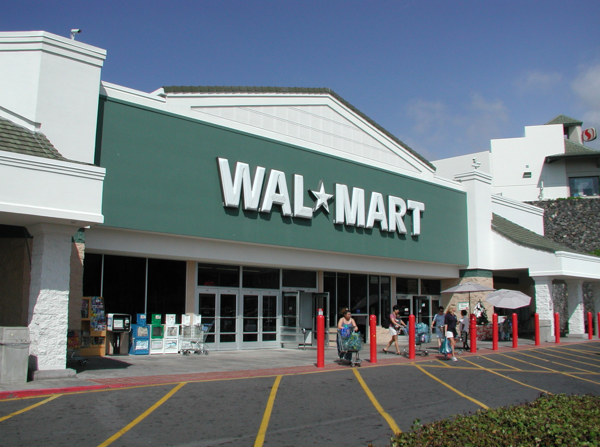 First the baseball: The scene was a game of T-Ball, where everyone bats every
inning, regardless of the number of outs.

The bases were loaded when a line drive ended up in the glove of the pitcher.
While he wondered how it got there, all the runners took off without tagging
up. The pitcher ran to third, then second, then first.

We kept counting the number of outs and they did not add up. First in our heads:
That doesn’t make sense. Then on our hand: That’s crazy. Then our other hand:
It kept adding up to four outs.

It took us a while to believe what we saw right in front of us.

And now Wal-Mart, the original Black Hat, is going green. Or better said, sustainable.
Let that sink in because it is true. Big time.

So much so that Treehugger.com says It “could end up being one of the biggest
motivators to make truly ‘green’ products ever.”

As in the history of the world.

Wal-Mart has made believers out of not just the biggest environmental organizations
in the world — like the Environmental Defense Fund and the World Wildlife Federation
– but also Wal-Mart’s suppliers.

That’s how they roll in Bentonville: Big.

Even the combined efforts of 8400 stores with two million associates doing $400
billion in sales every year was not enough: Wal-Mart figured out 90 percent of
the carbon was coming from its supply chain. So it reached down to all its 100,000
vendors — and their vendors and their vendors — and told them that reducing
carbon footprints — reducing energy — will save money.

Everyone knows that is what Wal-Mart is all about.

“And vendors are listening,” said Tom Rooney, CEO of SPG Solar in Novato, California,
one of the largest solar installers in the country. “We are seeing renewed and
intense interest in industrial- and commercial-scale solar because of Wal-Mart
and Proctor and Gamble and other companies are showing their suppliers how to
change their shipping, packaging, storing, selling, heating, cooling, disposing of,
recycling and other practices to squeeze energy out of the supply chain and save
money. And solar is a big part of that.”

Not that many need much coaxing: Financial incentives for solar today are so
strong that many companies are essentially getting free energy — and more –
by buying a new solar array from the money they will save from lower energy bills.
And having a big chunk left over.

Now on top of that, the largest companies in the world are saying solar and other
renewables have to be a part of their supply chain. By some estimates, 1 in 3
dollars worldwide is associated with a company that does business with Walmart.
So, if you shift Walmart and its suppliers, the global economy shifts with it,
says R. Paul Herman at hipinvestor.com. Or as the New York Times puts it: “because
of its size and power, Wal-Mart usually gets what it wants.”

Earlier this year, Wal-Mart sent its vendors a 15 part questionnaire to determine
what their companies were doing to become more sustainable. Also leading the
effort is Wal-Mart’s “Sustainability Index.”

Scholars from around the world are gathering at the Universities of Arizona and
Arkansas to create this new measure of the energy created — and wasted — during
the life cycle of a product found at Wal-Mart.

It won’t be ready for at least another year.

“But that doesn’t matter,” says Rooney. “No one is fighting Wal-Mart or complaining
about the reporting that this new index requires. Just the opposite: They are
racing to outdo each other, and surpass Wal-Mart’s expectations. Right now.
Not next year. “

In May, the world’s largest consumer product company, Proctor and Gamble, announced
its own, similar, sustainability program for its vendors. Joining IBM, GE, and
other corporate giants on the sustainability train.

The results are already showing up on the bottom line:

“Perhaps more than any other company, Wal-Mart has pursued this approach,” said
the Harvard Business Review of Wal-Mart’s new vision of sustainability. “The
payoffs are already showing up: One of the Sustainable Value Networks, tasked
with fleet logistics, came up with a transportation strategy that improved efficiency
by 38%, saving Wal-Mart more than $200 million annually and cutting its greenhouse
gas emissions by 200,000 tons per year.”

Wal-Mart: Not just for beating up anymore. Or maybe we are just seeing the world’s
first quintuple play.